Steam Traps
A steam trap is designed to separate and drain condensate, air and other incondensable gases (gases dissolved in water) from a steam system to increase heating efficiency and reduce maintenance costs associated with corrosion, leakage and damage to pipeline components. There are several steam trap designs, some operate based upon fluid temperature, mechanical traps rely on fluid density and others react to changes in fluid dynamics such as flash steam. In all cases steam traps are installed in the lowest sections of piping because that is where condensate collects.

Below is an example of a mechanical steam trap. Condensate enters from the ① side inlet port. The ② internal baffle at the point of entry helps separate entrained gas which is vented through the ③ uppermost threaded port. The vent line can be plumbed back to the system or sent to atmosphere as dictated by the application. 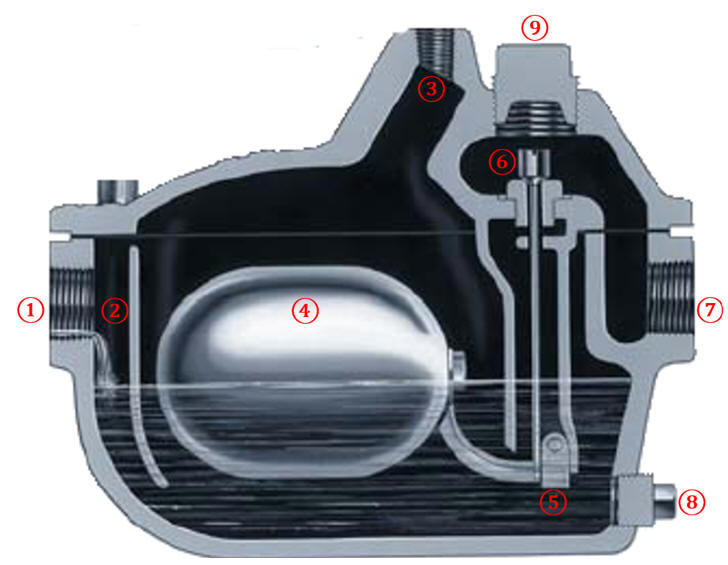 Within the steam trap is an ④ oblong float made of 18-8 stainless steel. Its buoyancy is pre-set due to sand contained within the float. Attached to the float is a ⑤ fulcrum and lever. As the chamber of the steam trap fills with condensate, the air and other gasses are displaced via the vent until the float rises sufficiently to rise the ⑥ valve plunger (attached to the lever) from its valve orifice or "seat". To reiterate, the upwards (rising) motion of the float corresponds to a downward movement of the valve plunger, unseating it from the valve orifice, allowing the condensate to ⑦ drain from the trap. When drained sufficiently, the float is lowered and the plunger is re-seated against its orifice.

The ⑧ lower drain plug illustrated above is for draining the trap prior to service as well periodic blow-down to remove sediment which may accumulate. It is important to note that the liquid within the trap is a barrier preventing steam (or other gas) loss via the drain port. If installed where freezing is a concern, an optional heating element can be installed through this port which keeps the retained condensate from freezing and damaging the steam trap.


The ⑨ large plug over the valve orifice enables periodic valve seat and plunger replacement as these components will eventually wear to the point where they no longer seal well.

The orifice diameter and system pressure dictate the condensate removal rate. The steam trap illustrated on this page has a 7/32" orifice and can drain condensate at a rate of 2500 lbs/hr at 100 PSI, equivalent to about 5 GPM. As a safety factor, the trap you select should have a capacity of 10-40% greater than your expected liquid load.

Thermomechanical and dynamic steam traps accomplish the same task but are actuated by either temperature or dynamics such as flash steam; some applications benefit from specific types of steam drain traps (a subject for a future article).

Mechanical steam traps are often referred to more generically as "float drain traps" because they are also used in non-steam systems to drain liquid condensate. 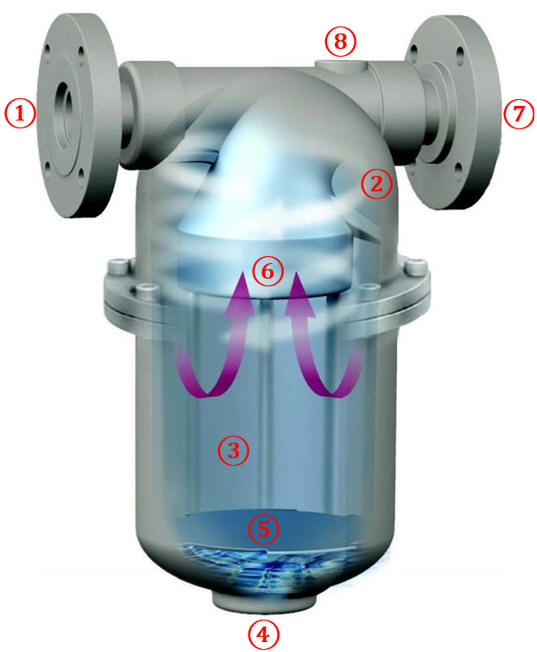 ① Steam enters the separators inlet and an internal vortex is created due to the internal suction nozzle protruding into the center of the vortex and the ② internal baffles angled towards the cylindrical body of the separator. Entrained droplets larger than 10 microns either impinge onto the internal surfaces or are propelled by centrifugal force within the ③ main body to the ribbed inner walls of the separator. The impinged droplets coalesce and drain to the ④ bottom of the vessel. The ⑤ vortex containment plate (VCP) prevents condensate from becoming re-entrained or "sucked-up" by the internal vortex. The volume between the VCP and drain port is the liquid hold-up capacity of the separator; its the maximum volume of condensate that can be stored prior to re-entrainment.

Only droplets smaller than 10 microns remain within the center of the vortex, pass through the ⑥ suction nozzle and ⑦ exit the separator. Centrifugal separators are 99% efficient for removing entrained droplets and particles larger than 10 microns and due to the centrifugal force within, they are considered self-cleaning.

This no-maintenance aspect differentiates centrifugal separators from vane, baffle and demisting pad separators which require periodic cleaning, have high higher differential pressure drops across the separator body and are limited to a specific turn down ratio. A centrifugal separator has an infinite turndown ratio, meaning it retains its droplet removal efficiency of 99% no matter how much the flow is reduced; this is not the case with vane and baffle styles which rely on turbulence or torturous pathways for droplet separation. This aspect is most critical for applications involving lower flow rates associated with start-up/shut down or upset conditions. The ⑧ equalizing or vent port may be used for side-entry style drain traps to facilitate drainage of condensate.

Working Together
Steam traps are used to remove the condensate from the separator body. The plumbing between the separator drain port and inlet of the trap depends upon the specific trap model but will often include a sediment strainer to protect the trap.

Just as steam separators and steam traps work together to optimize a steam system, we work with YOU to properly size separators and traps for your specific application. Call us at 908.362.9981 or use our inquiry form for immediate assistance with your application!