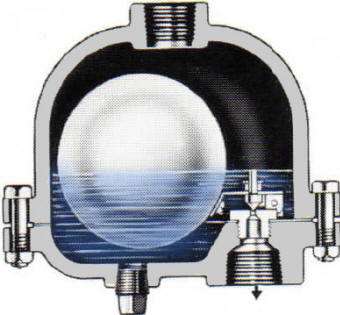 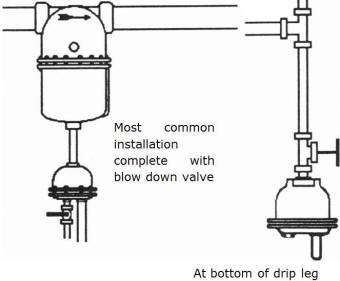 Automatic float style condensate traps provide a reliable method of automatically draining liquid from a pipe system without loss of any process gas.  Float drain traps are typically installed at low points in the plumbing system where liquid accumulates from storage tanks, gas/liquid separators and at the bottom of vertical piping.

How Float Drain Traps Work
Liquid flows into the drain trap from above and fills the trap until the hollow stainless steel ball floats sufficiently high enough to open the valve attached to it.  The system pressure acts upon the liquid and it passes through the valve to drain until the level within the trap drops sufficiently, causing the float to drop low enough to seal the drain orifice closed.

At all times there is a barrier of liquid within the trap, thus only the liquid drains from the trap and the steam, compressed air or other inert gas stays within the piping system.  The lower plug is used for occasional blow down if particulate such as pipe scale are introduced into the trap.  Installing a Y strainer to protect the trap from excessive scale found in older systems is a good idea.  All of the serviceable components are attached to the drain trap cover for easy inspection and maintenance.

When installed in locations susceptible to freezing, we offer models that have an extra port in which a 50 watt heater can be installed; this keeps the trap reservoir from freezing. 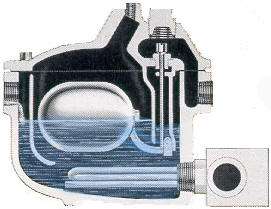 Whereas float drain traps are used in low sections of piping to drain-out accumulated liquid, you can install them in high sections of piping to eliminate accumulated air/steam/gas.  The model 90 and 95 AC float drain traps function as an air/steam vent when installed "upside-down".  In this position the hollow float naturally unseats the plunger from the seat and allows air, steam or other gases to vent.  Once fluid enters the trap, the float rises until the plunger seats with the valve, thus preventing any fluid loss. 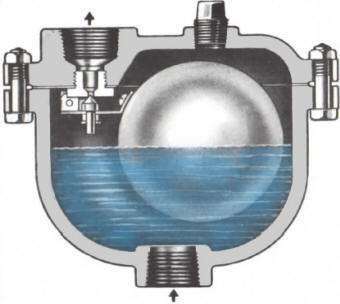