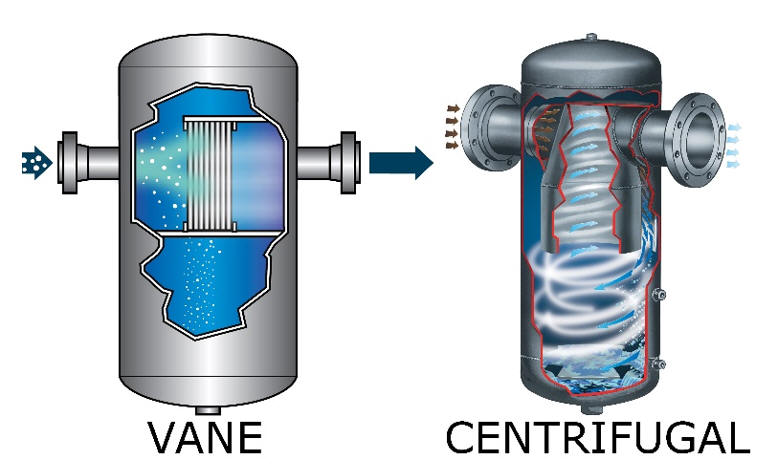 Centrifugal separators are the most common design used to remove entrained droplets and particles from gaseous processes although there are applications which benefit from a vane design. Following is a comparison of both designs to assist with selecting the most appropriate version for your application.

A centrifugal gas/liquid separator relies on Newton's first law (law of inertia) and conservation of angular momentum; centrifugal force propels entrained droplets and particles downwards and away from the center of the cylindrically shaped vessel where they coalesce and drain to a common sump. The centripetal force is proportional to the mass of the droplet/particle and the ratio of tangential velocity within the vessel. Simply put, the density contrast between the process gas and droplet/particle is significant enough that performance is maintained even at low flow conditions. When properly sized they are 99% efficient for removing entrained droplets and particles larger than 10 microns. The gas discharges through an exit nozzle which is extended internally within the vessel near the center of the vapor vortex. The simplified geometry renders this a self-cleaning, maintenance-free design for the life of the vessel (often measured in decades). 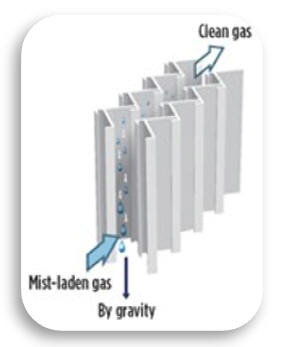 Vane Design
The most basic vane design consists of baffles designed to maximize the open area (minimize flow resistance/pressure drop) while creating a complex pathway which droplets impinge upon. The resulting liquid film and coalescence form into larger droplets which drain to a common point and are routed to the separator sump. The complexity of the vane includes pathways to isolate the separated liquid from re-entrainment into the process gas. 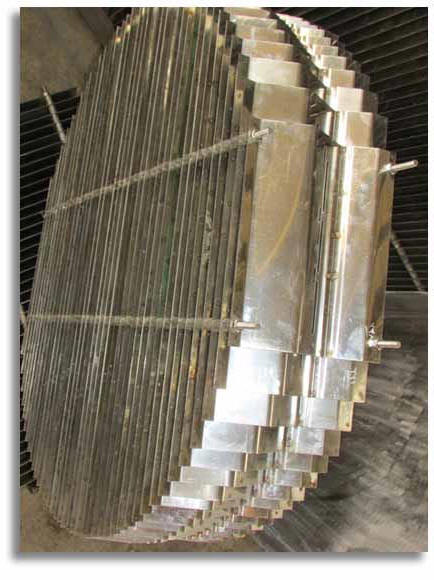 Thus, a vane separator is a type of coalescing separator with the additional internal geometry increasing the efficiency of droplet removal and enabling finer droplets to be removed. Our article “Coalescer Gas/Liquid Separator Designs” illustrates multistage coalescer designs, employing a centrifugal separator section with a coarse (demisting pad) or fine (coalescing filter cartridge) stage for removal of droplets as fine as 1-4 microns.

Applications for Coalescer and Vane Separators

The complexity of the internal geometry within coalescer separators results in higher differential pressure unless the physical vessel size is increased to compensate accordingly. Even when the difference in differential pressure is not significant, coalescer separators are designed to be opened and for the internal vanes, cartridges and pads to be removed for cleaning or replacement. This requires vane separators to have a flanged body or removable dished head to enable access to the internals without disconnecting the vessel from the pipeline. These characteristics relegate vane separators for 2” and larger size pipelines; they can be fabricated with smaller connections however the body size is commensurate with the diameter and length generally required for installation into 2” and larger size pipelines.

Generally speaking, vane and coalescing separators perform best when applied to applications having liquid and particles which are not waxy, sticky or viscous. Any liquid and particle combination that might result in plating or build-up will result in increased differential pressure, reduced efficiency and necessitate cleaning or replacement of the internal element(s).

Since vane style separators typically cost 50% to 80% more than centrifugal separators due to their larger physical size and internal complexity, the application needs to be sensitive enough to droplets of 6-10 microns to justify the additional initial expense and periodic maintenance requirements.


The most common application for vane separators is within steam systems prior to expensive turbo compressors whose fan blades are especially sensitive to damage from droplet impingement. In such applications fouling of the vane assembly is not an issue and the increased cost for the vane design is easily justified given the costs involved for repair of turbine systems.

Centrifugal separators are a better choice when the liquid and particle load result in gummy, slimy and sludge-like deposits; such materials would tend to foul a vane assembly. Centrifugal separators are also more compact and a less expensive choice for any application where an efficiency of 99% for removal of droplets greater than 10 microns is acceptable. Centrifugal separators are used through the petrochemical, power generation and various manufacturing industries to protect downstream equipment and processes from excessive droplets and particles; in some cases the separated material is the product and the gasses are a byproduct of the manufacturing process.

Comparison of Vane and Centrifugal Separators

The efficiency of vane separators is dependent upon an acceptable range of velocity through the internal vane baffles; when the velocity is above or below the optimal range, efficiency suffers. The rate of liquid separation is also limited for vane separators – too much liquid and carry-over will occur.