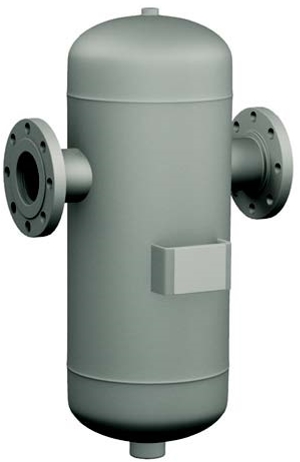 Horizontal style gas liquid separators have inlet and outlet nozzles located on the same plane and are often in-line (180°apart) although the outlet nozzle can be offset 90°to 270° from the inlet nozzle if needed.  All of our single stage centrifugal separators are designed to remove droplets and particles greater than 10 microns with 99% efficiency, however their design affects the rate or capacity of droplets that can be removed.  The liquid removal capacity is expressed as a percentage of the separators maximum flow capacity, thus we convert the separators volumetric flow to weight flow and then based upon the percentage for a given separator design can estimate the liquid removal capacity.

The most common and inexpensive horizontal gas liquid separator consists of a cylindrical pressure vessel having an inlet and outlet in addition to vent and drain ports.  This style of separator may also be used for vertical down flow orientation.

The air, steam or other gas enters the vessel and encounters a baffle having slots located at right angles to the process flow.  Due to reduction in velocity and inertia, most droplets impinge on the baffle and coalesce to larger droplets.

The gas flow though the baffle creates a vortex induced centrifugal force propelling entrained droplets larger than 10 microns away from the vessel outlet and towards its walls.  All of the coalesced liquid exits through the drain port.  The liquid removal capacity is equivalent to 5% of the separators maximum weight-flow capacity and that removal rate can be increase to as much as 20% with the addition of a cylindrical sump.

High Liquid Load Centrifugal Separators
Processes which have higher volumes of liquid or where "slugs" of liquid are possible benefit from the "T" design.  The principle of operation is the same as previously described except that the gas flow must drop below the inlet and outlet nozzle plane and due to inertia, pressure drop and centrifugal forces droplets are coalesced and drain to a common port.  Agitation and reentrainment of the coalesced fluid is prevented with a lower baffle.

The length of the vessel under the nozzles and the complexity of the internal baffle geometry determine the percentage of the separators weight flow capacity for liquid removal, ranging from 40 to 90%.

All of the horizontal separator designs described above have no internal parts or serviceable components and they are considered self-cleaning due to the continuous vortex "scrubbing" the internal geometry.

Extra-Fine Droplet Removal
The addition of a secondary filter media coalescing stage enables droplets as fine as 0.3 microns to be removed from the process flow.  This increases the complexity of the vessel design as it will now require periodic replacement of special borosilicate microglass filter cartridges.